Stocks got off to a good start last week, hitting new record highs on Monday and Wednesday, but retraced their gains in the latter half--a move that was nominally attributed to the release of the Senate's tax reform bill. More likely, however, last week's loss was the result of some profit taking following a largely uninterrupted two-month rally.

The financial sector paced the week's retreat, which is fitting considering the group played a leadership role in the market's most recent bullish run; the financial sector jumped 11.4% from September 8 to November 3, while the benchmark S&P 500 added 5.1%. Dow components JPMorgan Chase (JPM) and Goldman Sachs (GS) lost 3.9% and 1.7% this week, respectively.

Meanwhile, the energy sector outperformed, finishing with a gain of 1.1%. The group benefited from an increase in the price of crude oil, which touched its highest level in more than two years; WTI crude futures finished higher by 2.0% at $56.75/bbl. Heightened tensions in the Middle East, which could potentially disrupt crude production in the region, were largely credited for the move.

Saudi Arabia's Crown Prince Mohammad bin Salman ordered the arrests of some of the country's most prominent political and business figures on allegations of corruption. In addition, Saudi Arabia ordered its citizens to leave Lebanon after accusing the country of declaring war, citing the presence of Iranian-backed Hezbollah members within the Lebanon government. 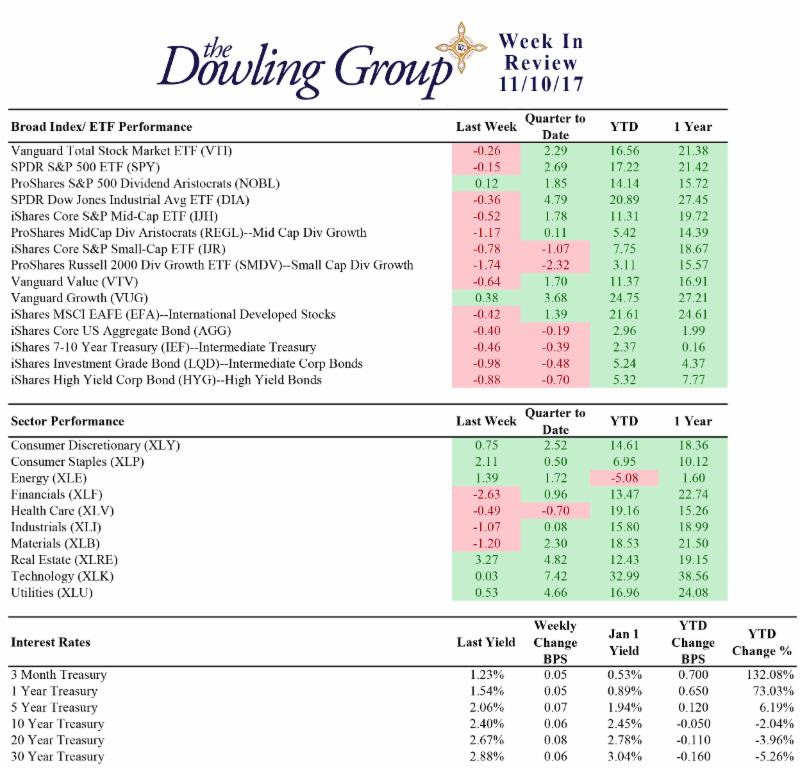 Back in the U.S., earnings season continued last week--albeit with fewer notable companies on the docket--but headlines were focused on M&A developments. Sprint (S) and T-Mobile US (TMUS) lost 7.2% and 3.6%, respectively, after announcing over the weekend that they could not reach a merger agreement.

Meanwhile, chipmaker Broadcom (AVGO) slipped 3.2% after bidding $70 per share (in cash and stock) for Qualcomm (QCOM), which, conversely, ended the week higher by 4.5%. There were also reports that the Department of Justice would require the sale of CNN before it would approve AT&T's (T) acquisition of Time Warner (TWX), but later reports said that claim was false.

Also of note, Walt Disney (DIS) and 21st Century Fox (FOXA) were reportedly in discussions regarding a sale of assets to Disney from Fox in recent weeks.

On the political front, the Senate on Thursday released its version of a tax reform bill, which called for delaying a cut in the corporate tax rate to 20% from 35% by one year and differed from the version that the House unveiled last week in several other key areas--including deductions related to state and local property taxes.

The two chambers will have to hammer out those differences in order to put the bill on the president's desk for approval, and uncertainty surrounding Congress' ability to do just that were cited by some as the main catalyst for Wall Street's weakness in the latter half of the week.

Following last week's events, investors still strongly believe that the Fed will raise rates next month, with the CME FedWatch Tool placing the chances of a December rate hike at 100.0%.