The equity market moved higher once again last week, with all three major indices settling at fresh record highs. The tech-heavy Nasdaq led the charge, adding 0.9%, while the Dow and the S&P 500 climbed 0.5% and 0.3%, respectively. Small caps underperformed, sending the Russell 2000 lower by 0.9%.

Some of the week's most notable headlines came out of the nation's capital, including details on the House's tax reform bill, which were released on Thursday. Highlights of the bill include an immediate—and permanent—reduction in the corporate tax rate from 35.0% to 20.0%, a repeal of state and local tax deductions—with the exception of a $10,000 limit for property taxes, a limit for mortgage interest deductions on new home loans of less than $500,000 (adjusted from $1,000,000), and no major changes to 401(k) tax laws.

Stocks initially sold off in reaction to the bill, but quickly bounced back.

Elsewhere in Washington, President Trump nominated Fed Governor Jerome Powell for the position of Fed Chair, and the Federal Open Market Committee unanimously voted to leave the fed funds target range at 1.00%-1.25%, as expected. The U.S. central bank reiterated its belief that the economy will continue to expand at a moderate pace and said nothing to alter the market's expectation for a rate hike in December; the CME FedWatch Tool places the chances of a December rate hike at 100.0%, up slightly from 99.9% last week. 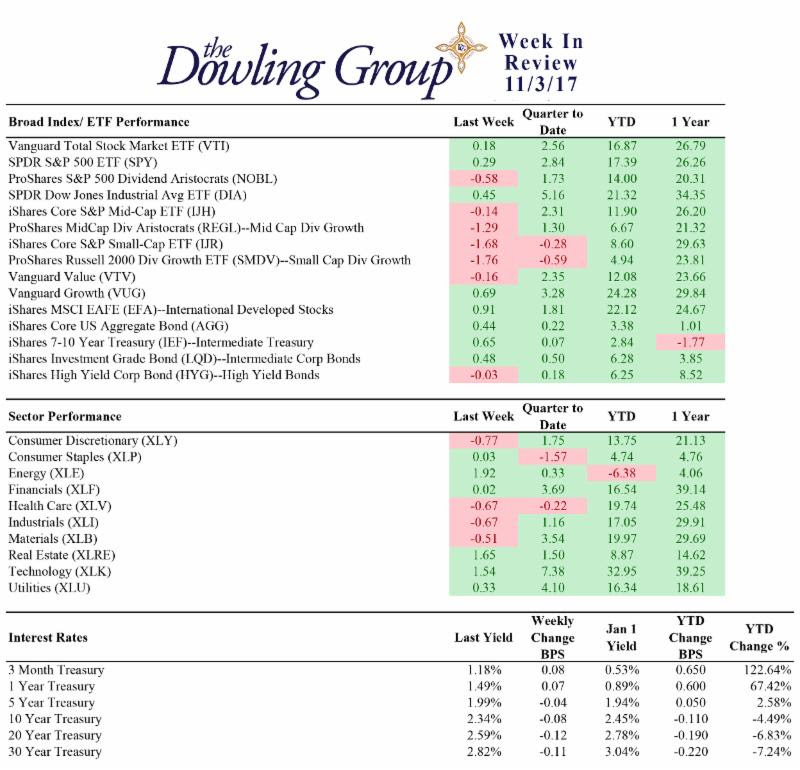 The Employment Situation Report for October crossed the wires on Friday, showing below-consensus nonfarm payrolls (+261,000 actual vs +300,000 consensus), nonfarm private payrolls (+252,000 actual vs +307,000 consensus), and average hourly earnings (0.0% actual vs +0.1% consensus). Still, the market took the report in stride as it confirmed that the labor market is still strong, but that strength hasn't resulted in a pick up in wages—and thereby inflation.

As for earnings, several tech heavyweights reported their quarterly results last week, including Apple (AAPL) and Facebook (FB). The two companies finished the week higher, adding 5.8% and 0.6%, respectively, after both beat earnings and revenue estimates. The S&P 500's technology sector (+1.8%) finished at the top of the week's sector standings.

On the downside, the consumer discretionary, health care, industrials, and materials sectors struggled, losing between 0.5% and 0.8%. Within the industrial group, transports showed particular weakness, sending the Dow Jones Transportation Average lower by 1.8%. The telecom services group (-2.6%) finished at the very bottom of the leaderboard once again, extending its 2017 loss to 17.4%.