The stock market advanced once again last week, notching a new record high in all five sessions, as investors digested another batch of third quarter earnings. The S&P 500 finished higher by 0.9%, while the Dow (+2.0%) did noticeably better and the Nasdaq (+0.4%) did modestly worse. For the month, the S&P 500 has added 2.2%.

Equities had their best performance on Friday after the Senate voted in favor of a budget blueprint for 2018--a crucial step for an eventual tax overhaul. If the upper chamber can reconcile its version of the budget with the version the House passed earlier this month, Republicans will have the ability to pass tax reform without any support from the Democrats under the reconciliation process.

The S&P 500's financial sector (+2.0%) was in focus for much of the week thanks to heavyweights like Goldman Sachs (GS) and Morgan Stanley (MS), both of which reported third quarter results on Tuesday morning. Goldman Sachs initially sold off following its release, but bounced back later in the week to finish higher by 2.6%. Morgan Stanley did even better, climbing 4.9%.

Health care stocks also rallied last week, with Dow components UnitedHealth (UNH) and Johnson & Johnson (JNJ) pacing the advance. The two companies ended the week higher by 7.8% and 4.4%, respectively, after reporting better-than-expected earnings on Tuesday. The health care sector added 1.8%, finishing right behind financials at the top of the leaderboard. 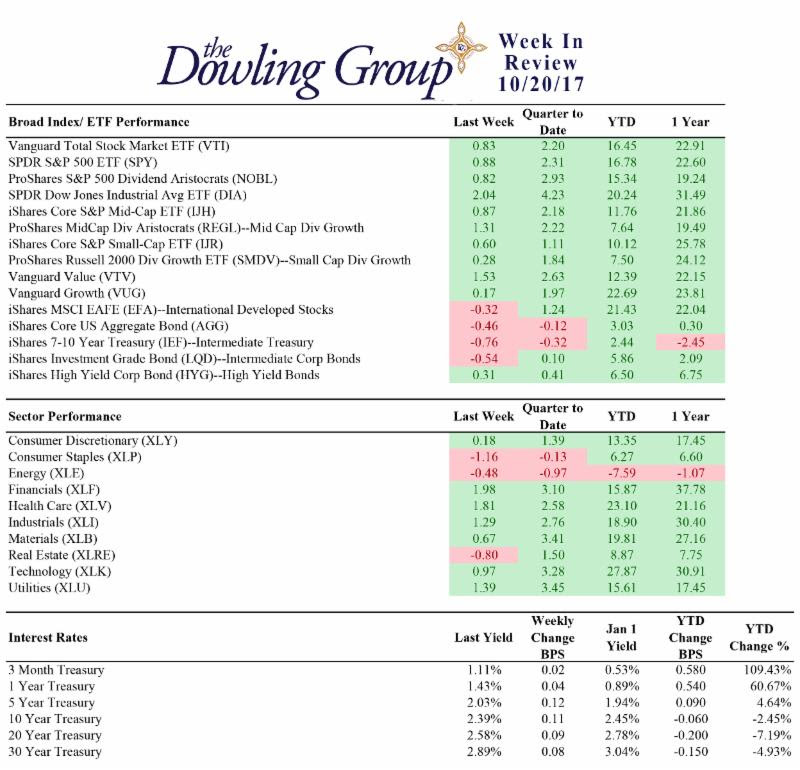 Telecom stocks within the S&P 500 finished slightly ahead of the broader market. Wireless giant Verizon (VZ) was a positive influence, climbing 3.5%, as investors rallied around its above-consensus earnings. The telecom services sector added 1.1% last week, but the advance did little to change the group's overwhelmingly bearish October trend; telecoms have dropped 4.7% month-to-date.

The consumer staples sector finished at the very bottom of the sector standings with a loss of 1.2%. Procter & Gamble (PG) and Philip Morris (PM) were among the most notable laggards within the group. P&G slipped 5.2% despite reporting above-consensus earnings, while Philip Morris lost 3.9% after missing both top and bottom line estimates and issuing disappointing guidance.

Following this week's events, the CME FedWatch Tool places the chances of a December rate hike at 93.1%, up from 82.9% last week.