The stock market moved modestly higher last week, touching new record highs yet again. The Dow led the advance, adding 0.4%, while the Nasdaq and the S&P 500 each settled with gains of 0.2% apiece. The small-cap Russell 2000 struggled, however, ending the week with a loss of 0.5%.

The retreat wasn't all that surprising as the financial sector did ride a four-week rally into earnings season—climbing 10.6% from September 7 to October 6—and, therefore, was likely overdue for a pull back. A decline in Treasury yields also worked against the sector, which typically benefits from an increase in interest rates. The benchmark 10-yr yield dropped eight basis points to 2.28%.

Softer-than-expected consumer prices had a hand in pushing Treasury yields lower, but did little to dial back the market's rate-hike expectations. The Consumer Price Index increased less than expected in September (0.5% actual vs 0.6% Briefing.com consensus), as did the core Consumer Price Index, which excludes food and energy (0.1% actual vs 0.2% Briefing.com consensus).

The minutes from the September FOMC meeting were also released last week, but contained little to no new information. In short, the minutes showed that the Fed favors staying on a path of gradual rate hikes, although there was growing concern that the factors keeping a lid on inflation may not be transitory after all. 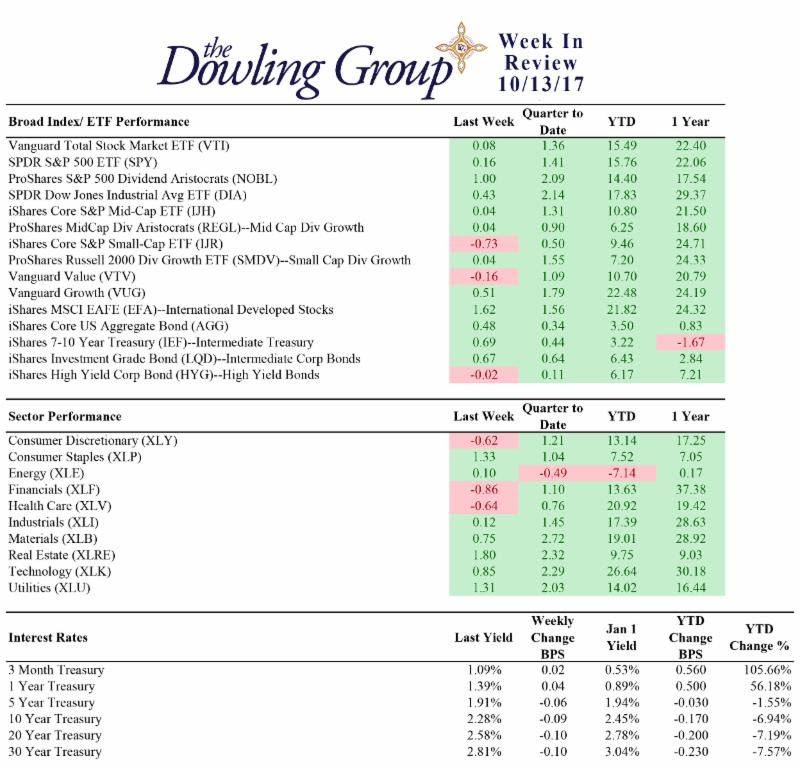 Following last week's events, the CME FedWatch Tool places the chances of a December rate hike at 82.9%, down modestly from 93.1% last week.

Industrial heavyweight General Electric (GE) had a rough showing last week, dropping 5.8%, after announcing that several of its top executives will be leaving the company. JPMorgan lowered its target price for the company to $20 from $22, which weighed on GE shares as well.

AT&T (T) was another notable laggard last week after announcing that its video subscribers declined for the third quarter in a row; the wireless giant finished with a loss of 7.5%.

On a positive note, the world's largest retailer—Wal-Mart (WMT)—jumped 9.7% last week after announcing a new return service that will allow its customers to return items they purchased online or in the store in under 30 seconds. Wal-Mart's brick-and-mortar locations potentially give the company an advantage over internet-based names like Amazon (AMZN) in the area of returns.

Wal-Mart's positive performance helped the S&P 500's consumer staples sector (+1.5%) settle alongside the technology (+1.3%), utilities (+1.3%), and real estate (+1.8%) groups at the top of the sector standings. On the flip side, the telecom services sector was by far the weakest performer—thanks mostly to AT&T—finishing with a loss of 4.6%.