The Dowling Group Week In Review: 9/29/17 Skip to Content

Technology stocks weighed on the broader market on Monday as investors engaged in a sector rotation trade that left the S&P 500's technology sector lower by 1.4%. Technology names were weak from the jump, but selling accelerated following comments from North Korea's foreign minister, who said that President Trump effectively declared war against North Korea in his U.N. speech last week and, therefore, Pyongyang has the right to take countermeasures against the U.S.--including shooting down U.S. strategic bombers, even if they're not in North Korean airspace.

Investors turned their attention to Fed Chair Janet Yellen on Tuesday as she gave a speech entitled "Inflation, Uncertainty, and Monetary Policy" at the NABE's annual meeting. Ms. Yellen defended a gradual path of rate hikes despite continued uncertainty in the area of inflation, but her comments didn't move the financial markets; equities finished the session flat. 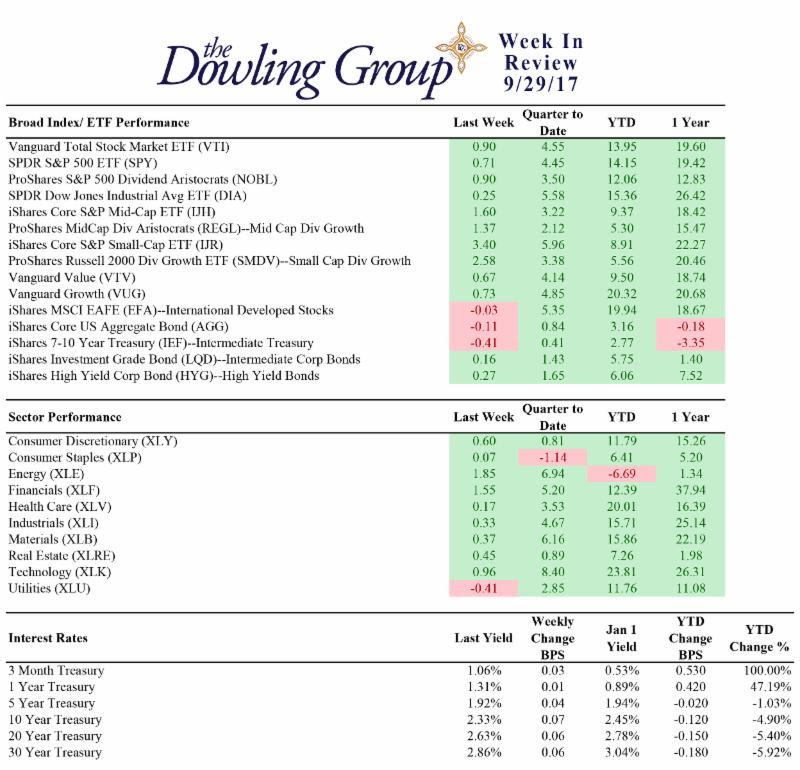 Things turned around for the equity market on Wednesday as investors cheered the GOP's tax reform outline, sending equities into positive territory for the week. Some of the most notable highlights of the plan include cutting the corporate tax rate to 20% from 35%, doubling the standard deduction, and reducing the number of tax brackets to three from seven. The plan calls for trimming the highest tax rate to 35.0% from 39.6%, but Congress will have the option to add a fourth bracket for the very top earners.

Details on how the government will make up for the immediate loss in tax revenue were limited. This topic will likely be an area of contention for the GOP going forward as many conservatives are opposed to the idea of driving up the federal deficit, which would probably be necessary to fund the tax overhaul--at least in the short term.

Market-moving headlines were scarce on Thursday, but that didn't prevent the S&P 500 from ticking up and registering a new record close. Roku (ROKU) opened for trading on the Nasdaq exchange on Thursday and had a solid first day, settling 67.9% above its IPO price of $14.00 per share.

Investors pushed stocks higher once again on Friday after the core PCE Price Index--the Fed's preferred gauge for inflation--for August came in below expectations, showing a month-over-month increase of 0.1% (consensus +0.2%). On a year-over-year basis, the core PCE Price Index is up 1.3%, down from 1.4% in the prior reading, and still a ways below the Fed's target of 2.0%.

Still, the fed funds futures market projects that the next rate hike will occur at the December FOMC meeting with an implied probability of 77.9%, up from 72.8% last week.