Stocks rallied to new record highs last week--more than making up for previous week's decline--following Hurricane Irma's weaker-than-expected Florida landfall and ahead of next week's FOMC meeting. The Dow led this week's advance, climbing 2.2%, followed by the S&P 500 (+1.6%), and then the Nasdaq (+1.4%). For the year, the S&P 500 now holds a gain of 11.7%.

The bulk of last week's gain came right off the bat as investors happily dialed back their estimates on Monday for damages related to Hurricane Irma, which quickly petered out after hitting the Florida Keys on Sunday. Insurers like Travelers (TRV) led the Monday rally, underpinned by the prospect of fewer-than-expected hurricane related claims, but much of their gains were unwound by the end of the week.

Equities followed up their stellar Monday performance with another win on Tuesday, but conviction was much more modest. Apple (AAPL) held its annual product event, in which the company unveiled a trio of iPhones, including the iPhone 8, the iPhone 8 Plus, and the high-end iPhone X--which CEO Tim Cook called "the biggest leap forward since the original iPhone."

On the whole, Tuesday's product event provided little new information as many of the details had been leaked beforehand. Apple sold off immediately following the event, with some investors citing concerns related to the iPhone X's later-than-expected release date (November 3). However, the tech giant bounced back on Friday, extending its massive year-to-date gain to 38.0%. 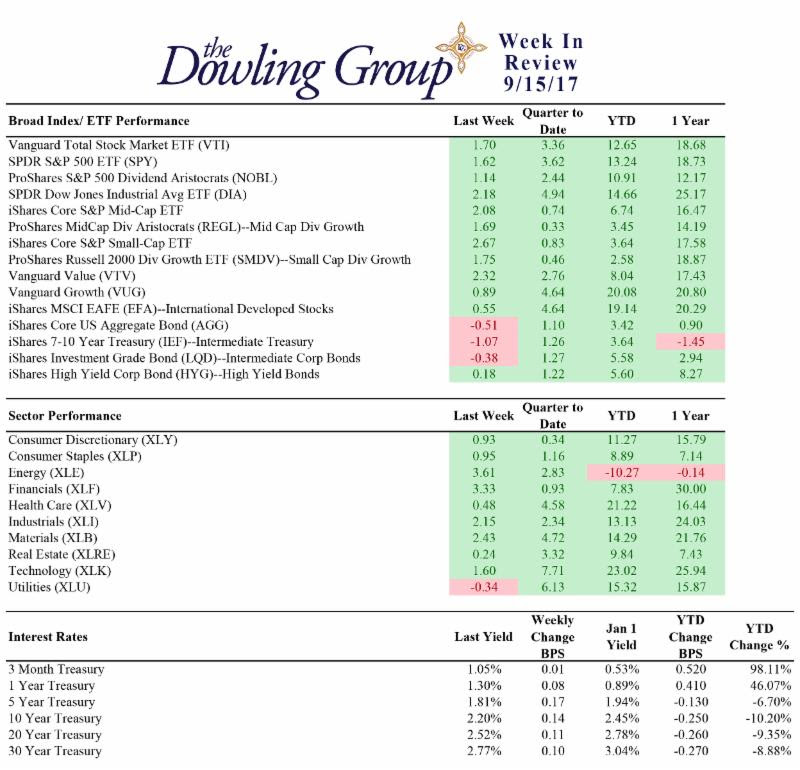 Following Tuesday's modest victory--which sent all three major U.S. indices to new record highs--the stock market took a breather, ending the week in a sideways trend. The Nasdaq ticked lower in the latter half of the week, settling just a step below its record high, while the S&P 500 and the Dow ticked up, further extending their record marks.

A hotter-than-expected August CPI reading (+0.4% actual vs +0.3% Briefing.com consensus), which showed a year-over-year increase of 1.9%, prompted an adjustment in rate-hike expectations. According to the CME FedWatch Tool, investors currently place the chances of a December rate hike at 57.8%, up from last week's 31.0%.

However, the Fed's massive balance sheet will be the focus of next week's FOMC meeting as it is widely expected that Fed Chair Janet Yellen will announce the start of a gradual reduction of assets bought in response to the 2008 financial crisis. The two-day FOMC meeting will kick off on Tuesday.