The Dowling Group Week In Review: 9/8/17 Skip to Content

The major U.S. indices all moved lower last week as geopolitical tensions with North Korea, declining confidence in the feasibility of tax reform, and Hurricane Irma weighed on investor sentiment. The Nasdaq led the retreat, dropping 1.2%, while the Dow and the S&P 500 finished with respective losses of 0.9% and 0.6%.

Even though the equity market settled lower for the week, it remains within striking distance of its all-time high; the S&P 500 finished Friday's session just 0.8% below its record-high close of 2,480.91. Treasuries rallied this week, sending yields to new lows for the year. The benchmark 10-yr yield dropped 11 basis points to 2.06%, hitting its lowest level since early November. 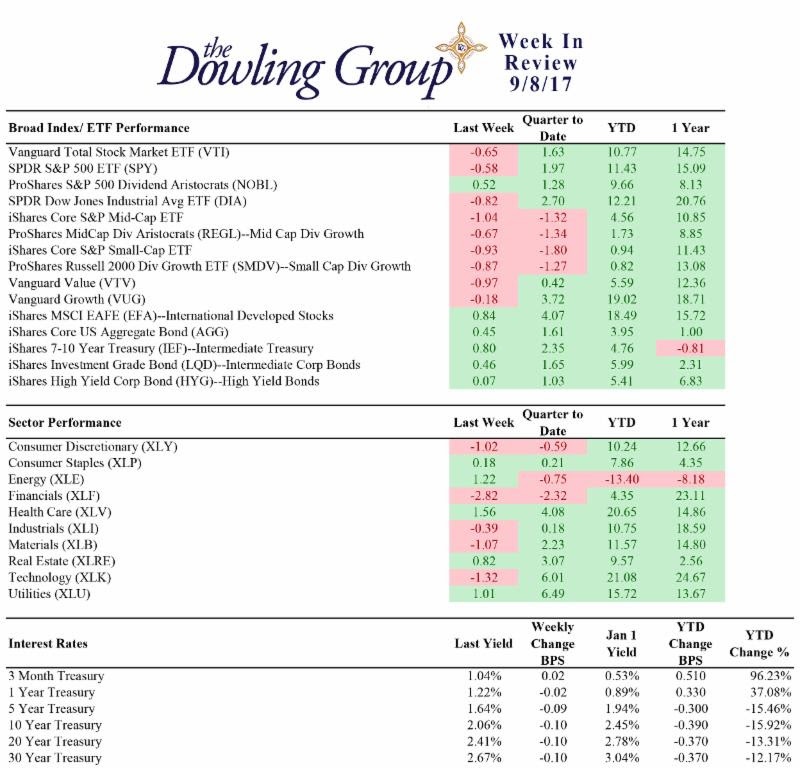 Relative strength in heavyweight names like Home Depot (HD), Exxon Mobil (XOM), and Pfizer (PFE) prevented the stock market from a significant decline, but there were some soft spots in small-cap and high-beta pockets of the market. The small-cap Russell 2000--which is seen as a leading indicator given that small-cap companies largely rely on domestic consumers--underperformed, dropping 1.0%. After pacing the stock market's post-election rally, the small-cap index now holds a year-to-date gain of just 3.1%, far below the S&P 500's year-to-date advance of 9.9%.

Following this week's events, the fed funds futures market places the chances of a December rate hike at 31.9%, down from last week's 43.7%.