The Dowling Group Week In Review: 9/1/17 Skip to Content

The stock market moved convincingly higher for the second week in a row as investors continued to buy the mid-August dip that pulled the major averages from their all-time highs. The Nasdaq moved back into record territory, climbing 2.7% to settle the week at a new all-time high. Meanwhile, the Russell 2000, the S&P 500, and the Dow added 2.6%, 1.4%, and 0.8%, respectively. 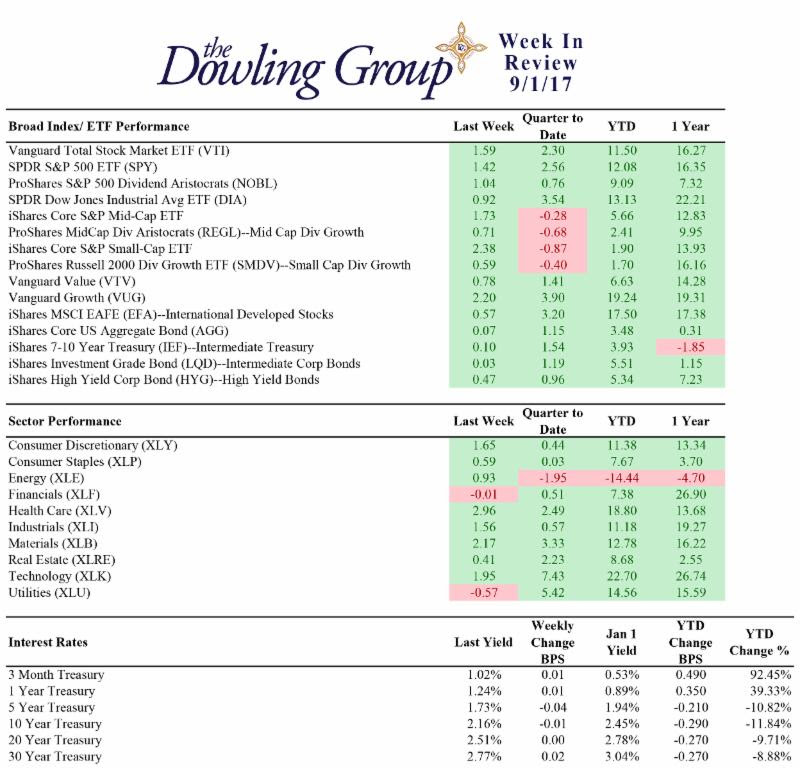 Economic data was the focal point last week as investors received a slew of economic reports—the most notable of which were the Employment Situation Report for August and the core PCE Price Index for July. Both reports helped ease the market's rate-hike concerns, providing further evidence that inflation has been, and will continue to be, relatively sluggish.

The core PCE Price Index, which excludes food and energy, increased by 0.1% in July (consensus 0.1%), but dropped on a year-over-year basis to +1.4% from +1.5% in June. The Fed has set a year-over-year target of 2.0% for inflation so July's deceleration doesn't bode well for the notion that the Fed will be able to follow through with its forecast of one additional rate hike this year.

Looking ahead, the market's attention will likely shift from rate hikes to the Fed's balance sheet during the next FOMC meeting, which is scheduled to take place September 19-20, as the U.S. central bank is expected to announce the start of a plan to reduce its massive $4.5 trillion balance sheet.