The Dowling Group Week In Review: 8/18/17 Skip to Content

Wall Street had another disappointing week, its second in a row, as investors continued to drag the major U.S. indices from their all-time highs. The Dow, the S&P 500, and the Nasdaq finished with losses of 0.8%, 0.7%, and 0.6%, respectively, while the small-cap Russell 2000 underperformed (-1.2%), dropping to its flat line for the year. 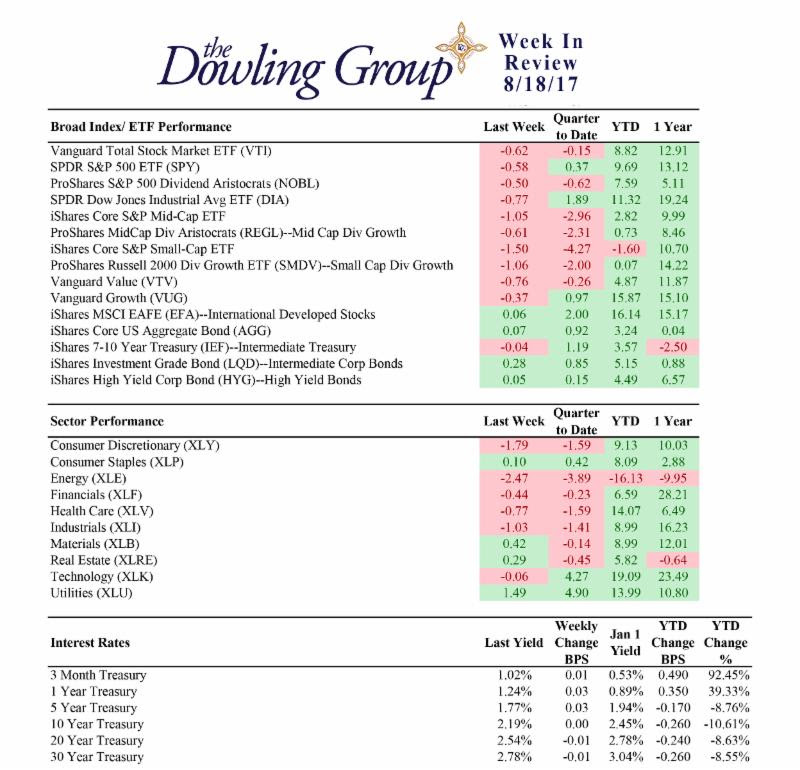 Thursday's session was perhaps the most notable of the week as the S&P 500 registered its second-worst performance of the year. The major indices opened Thursday's session with modest losses, but moved deeper into negative territory following a rumor that President Trump's chief economic advisor Gary Cohn plans to resign from his position following the president's controversial comments regarding last weekend's events in Charlottesville, VA. The White House later declared that the rumor was "100% false", but it did little to reverse the market's downward trend.

True or not, the rumor didn't do much to dispel the notion that working with the president could be a political liability, especially considering that it came on the heels of Mr. Trump's Wednesday decision to disband his Manufacturing Council and Strategy & Policy Forum in response to several CEOs leaving the two groups. The chief executives cited Mr. Trump's controversial Charlottesville comments as the reason for their departures. If Republicans in Congress start distancing themselves from Mr. Trump, it will be that much harder for him to push through his pro-growth agenda.

However, those concerns eased a bit on Friday after President Trump fired White House Chief Strategist Steve Bannon, a decision that was well received by the market. Mr. Bannon was the chief executive of Mr. Trump's presidential campaign and has been described as perhaps the most polarizing figure within President Trump’s inner circle. Therefore, in the absence of Mr. Bannon, the thinking is that the president might dial back his rhetoric a bit, making it easier for the White House to work with Congress in passing the president's pro-growth agenda.