The Dowling Group Week In Review: 8/4/17 Skip to Content

According to the Dow Jones Industrial Average, the stock market had yet another bullish week; the industrial average ended Friday at a record high, for the eighth session in a row, and a weekly gain of 1.2%. However, the S&P 500 and the Nasdaq tell a less conclusive story; the S&P 500 muscled its way to a modest victory, adding 0.2%, while the Nasdaq dropped 0.4%.

Regardless of last week's mixed performance, there's no question that investors are still bullish as stocks hover near all-time highs and the CBOE Volatility Index (VIX) hovers near an all-time low. 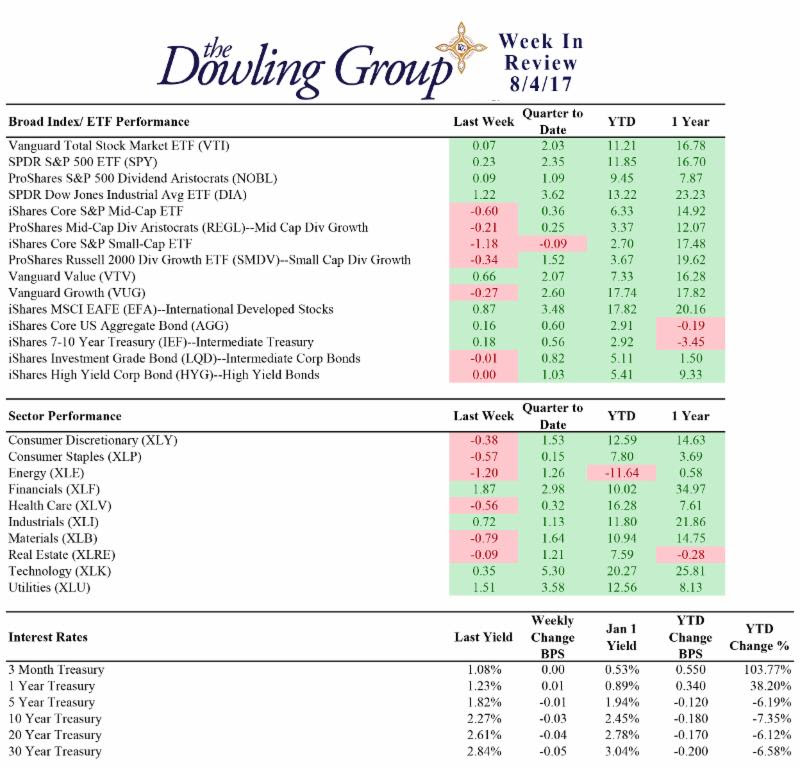 Of those headlines, two are worth a closer look—Apple's earnings report and the Employment Situation Report for July. Apple is the S&P 500's largest component by market cap and has played a huge role in the stock market's 2017 advance, evidenced by the massive 29.6% year-to-date gain it took into Tuesday night's earnings release.

Needless to say, it's quite impressive that the company was able to deliver in the face of such lofty expectations. However, it's also important to note that much of the positive sentiment surrounding the company has to do with its upcoming iPhone 8 release, which has been generating hype for months. So far, everything looks to be on track for the fall release, but if that changes, so might the bullish bias.

As for the July jobs report, the key take away is it hit the sweet spot once again as job growth was strong but wage growth was not, keeping inflationary concerns at bay. The fed funds futures market points to the December FOMC meeting as the most likely time for the next rate-hike announcement with an implied probability of 50.4%. Last week, the market expected the next hike to occur in January.