The Dowling Group Week In Review: 7/28/17 Skip to Content

Investors had a massive pile of earnings reports to work through last week. The results were generally positive, but equities still sold off in some instances as many companies rallied for several weeks in front of their reports, pricing in much of the good news beforehand. The S&P 500 finished the week just a tick below its flat line, the Nasdaq dropped 0.2%, and the Dow outperformed, climbing 1.2%.

The stock market began the week with a rather range-bound performance on Monday as small victories from the top-weighted technology and financials sectors roughly canceled out losses from the nine remaining groups. Alphabet (GOOGL) helped carry the tech space, muscling one more win ahead of its earnings report, which crossed the wires on Monday evening.

Alphabet reported better than expected earnings and revenues, but slid 2.9% on Tuesday nonetheless. In general, earnings continued to eclipse expectations on Tuesday with Caterpillar (CAT), McDonald's (MCD), DuPont (DD), and United Technologies (UTX) all beating earnings per share estimates. The positive results helped push the S&P 500 and the Nasdaq to modest victories and new record highs.

The Dow joined the record-high club in the midweek session, outpacing its peers on the back of Boeing (BA). The airplane maker surged 9.9% after reporting better than expected earnings and raising its earnings guidance for the fiscal year. Wireless giant AT&T (T) also moved solidly higher, adding 5.0%, following its latest quarterly report, which showed above-consensus earnings. 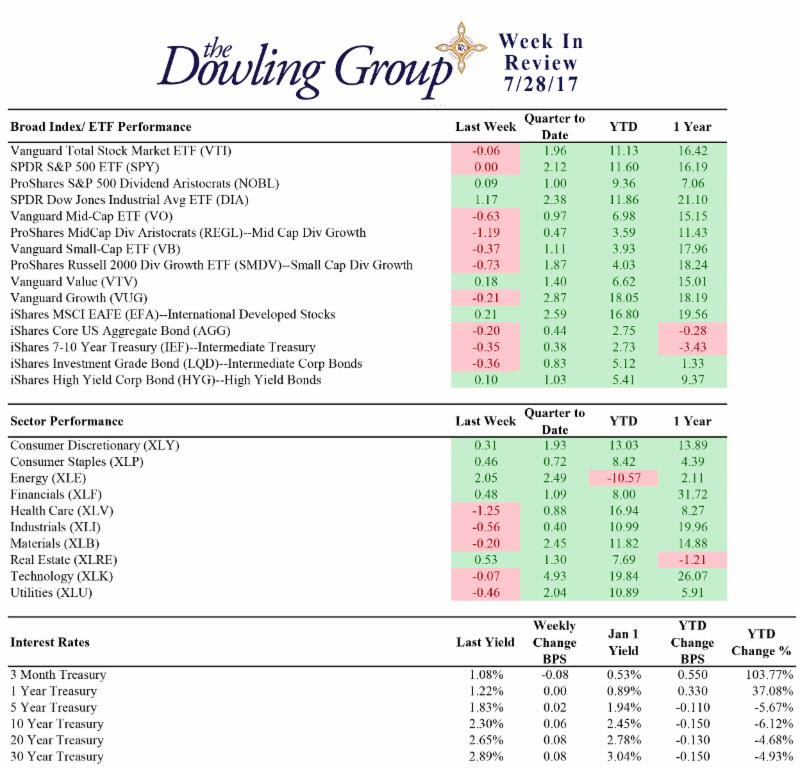 Investors took a break, albeit a short one, from earnings season on Wednesday afternoon when the Fed released its latest policy directive. However, the release largely turned out to be a nonevent. The FOMC decided to keep the fed funds target range at 1.00%-1.25%, as expected, and noted that it expects to begin paring its balance sheet "relatively soon", which was interpreted by many to mean September.

Earnings came back into focus on Thursday with Facebook (FB) headlining the lineup. The social media giant jumped to a new record high after reporting better than expected earnings and revenues, however, the company gave back a good portion of said advance as tech stocks began to sell off in the afternoon, pushing the technology sector to the bottom of the leaderboard.

Moving into Friday's session, investor sentiment was down mildly after Amazon (AMZN) reported worse than expected earnings on Thursday evening. The e-commerce giant dropped 2.5%, but the broader market held up relatively well with the Dow settling at another record high, its third in a row. Also of note, the advance estimate of Q2 GDP came in slightly below expectations (2.6% actual vs 2.8% Briefing.com consensus).

Following last week's policy directive, the fed funds futures market now points to the January FOMC meeting as the most likely time for the next rate-hike announcement with an implied probability of 50.8%. Prior to last week, investors were anticipating the next rate hike to occur in December.