The Dowling Group Week In Review: 7/21/17 Skip to Content

Equities kept chugging along last week, underpinned by a generally solid batch of earnings reports and the notion that monetary policy will remain accommodative for the foreseeable future. The S&P 500 ended the week higher for the third-consecutive time, adding 0.5%, but the real star was the Nasdaq, which climbed 1.2% and settled at a new record high for three sessions in a row. The Dow lagged last week, finishing with a small loss of 0.3%.

The stock market kicked off the week with a rather uneventful performance on Monday that left the major averages little changed. However, activity picked up on Tuesday as the Nasdaq climbed to a new record high for the first time since June 8. Netflix (NFLX) headlined the earnings front, surging 13.5%, after adding a surprisingly-large number of new subscribers in the second quarter.

Buyers were in the driver's seat during the midweek session, pushing the Nasdaq, the S&P 500, the Dow, and the small-cap Russell 2000 to new all-time highs. Each of the S&P 500's 11 sectors finished in the green with the energy group setting the pace following an upbeat EIA crude inventory report. Conversely, financials and transports struggled once again, shrugging off some relatively upbeat earnings reports.

However, it's important to note that the S&P 500's financial sector and the Dow Jones Transportation Average both had bullish, multi-week runs ahead of earnings season, making it difficult for their components to advance on upbeat results alone. 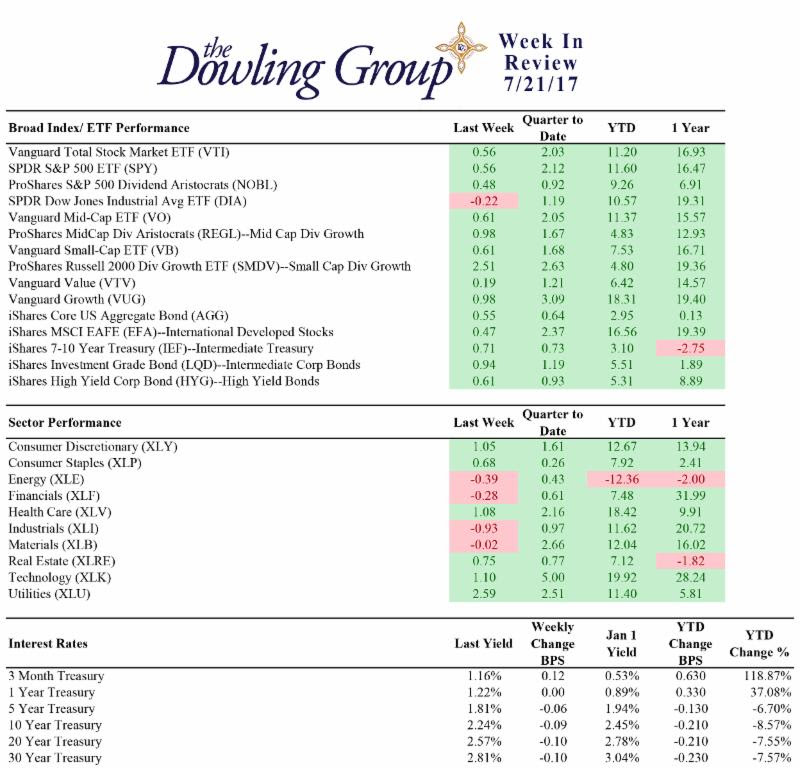 On Thursday, monetary policy was the focal point as investors digested the latest policy decisions from the European Central Bank and the Bank of Japan. Both central banks decided to leave interest rates unchanged and sounded dovish about future accommodation. However, the euro rallied against the U.S. dollar nonetheless as ECB President Mario Draghi failed to dispel the notion that the ECB might soon announce a tapering of its asset purchase program.

The Nasdaq eked out another record close, extending its winning streak to ten sessions in a row, while the S&P 500 and the Dow finished just shy of their unchanged marks. The telecom services sector was the top-performing group--which has been a rarity this year--following an upbeat earnings report from T‑Mobile US (TMUS). However, ironically, TMUS shares finished solidly lower.

The fed funds futures market still points to the December FOMC meeting as the most likely time for the next rate-hike announcement with an implied probability of 52.0%, up slightly from last week's 50.6%. The Fed will release its latest policy statement on Wednesday afternoon.