The Dowling Group Week In Review: 7/14/17 Skip to Content

The stock market got off to a slow start last week, but Fed Chair Janet Yellen's semiannual testimony before Congress sparked a rally in the midweek session that lingered all the way into Friday's closing bell. In the end, the S&P 500 registered its largest weekly gain since the end of May and settled Friday's session at a new record close. For the week, the S&P 500 advanced 1.4%.

For the most part, the first two sessions of the week were uneventful. The stock market did make a sharp move lower on Tuesday after Donald Trump Jr. tweeted an email exchange that involved him setting up a meeting with a Russian lawyer in an attempt to gain some possibly incriminating information on then-presidential candidate Hillary Clinton. However, the bearish sentiment didn't last and the S&P 500 entered Wednesday's session flat for the week.

Equities rallied in the midweek session after Fed Chair Janet Yellen's semiannual monetary policy testimony came off less hawkish than many were anticipating. One of the key takeaways from Ms. Yellen's prepared remarks was her acknowledgment that "the federal funds rate would not have to rise all that much further to get to a neutral policy stance." The statement created a sense that the Fed may in fact follow a shorter path of rate hikes that will keep the longer-run neutral level of the federal funds rate below levels that prevailed in previous decades. 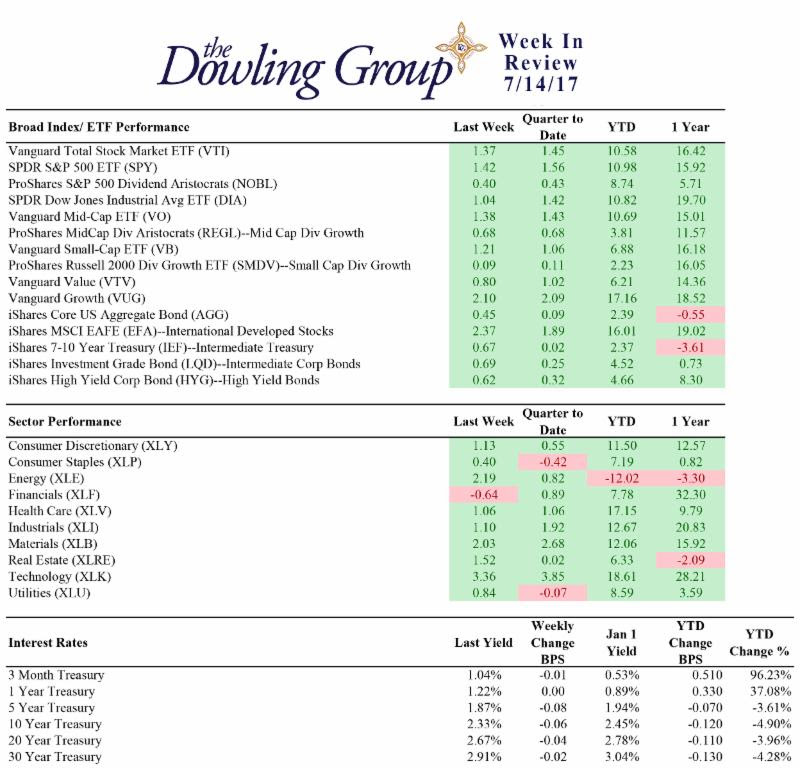 The S&P 500 leaned on its most influential sectors, namely technology and financials, to capture its third win of the week on Thursday. The financial sector's positive performance was particularly notable as the group plays an important role in driving economic activity and had failed to keep pace with the broader market in the three prior sessions. Financials remained a focal point once again on Friday with JPMorgan Chase (JPM), Wells Fargo (WFC), and Citigroup (C) headlining the earnings front.

All three of the aforementioned banks reported better than expected earnings--with JPM and C also beating revenue estimates--but the results were just not enough, at least in the market's mind, to justify the bullish six-week run that JPM, WFC, and C rode into Friday's session. The financial sector settled in the red, losing 0.5%, but the S&P 500 managed to advance to a new all-time high thanks to gains from ten of its eleven sectors.

In addition to earnings, economic data was also a focal point on Friday as below-consensus retail sales and core CPI readings for the month of June prompted a rally in the Treasury market; the benchmark 10-yr yield, which moves inversely to the price of the 10-yr Treasury note, dropped three basis points to 2.33%, ending the week with a six-basis point loss.