The Dowling Group Week In Review: 7/7/17 Skip to Content

Equity indices kicked off the third quarter on a positive note, finishing the first week of July with modest gains. Trading volume was light as many investors took some extra time off to celebrate the Fourth of July holiday. The S&P 500 added 0.1% while the Nasdaq and the Dow finished with gains of 0.2% and 0.3%, respectively.

The major averages settled mixed in an abbreviated session on Monday. The financials and energy sectors were bullish, finishing at the top of the day's leaderboard, and helped the S&P 500 overcome the top-weighted technology sector's third-consecutive loss. The tech-heavy Nasdaq wasn't so lucky, dropping 0.5%, while the Dow outperformed, hitting a new intraday record high.

U.S. markets were closed on Tuesday in observance of the Fourth of July holiday, but the benchmark index picked up where it left off in the midweek session, registering another modest win with the technology group leading the charge. The minutes from the June 13-14 FOMC meeting were released on Wednesday, but did little to change the market's rate-hike expectations.

In the minutes, Fed members seemed generally upbeat about economic activity and gave the impression that they believe the recent softness in inflation is transitory. In addition, Fed officials were divided on when to start unwinding the Fed's balance sheet; some wanted to start in a couple of months while others preferred to hold off until the end of the year. 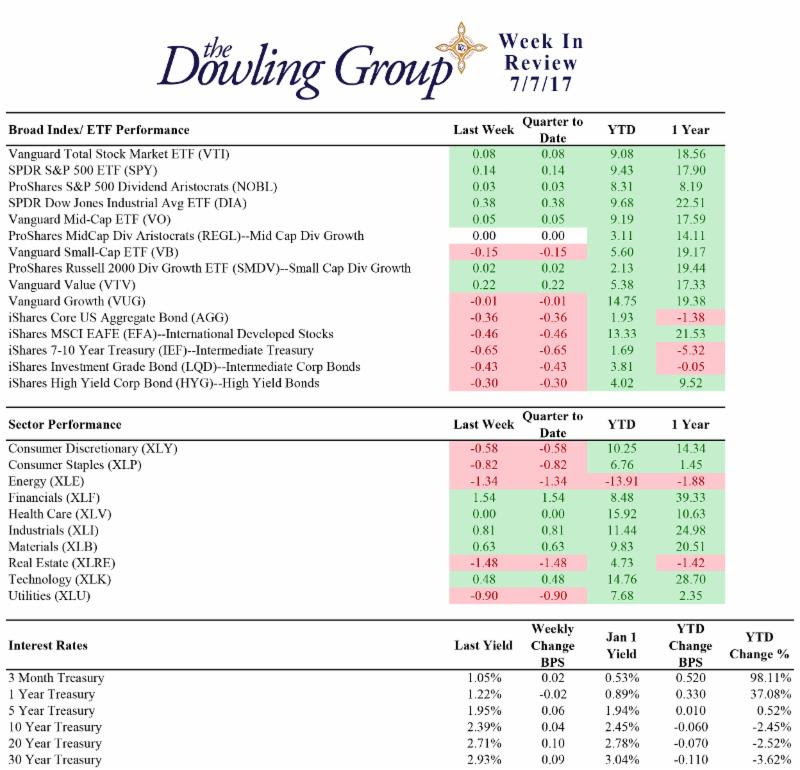 Investors pulled back on Thursday, dragging all three major averages into negative territory for the week and leaving the S&P 500 below its 50-day simple moving average for the first time in nearly two months. The market expressed concerns about less accommodative central bankers, evidenced by rising interest rates around the globe. U.S. Treasuries moved in a curve-steepening trade, helping to keep the influential financial sector ahead of the broader market.

The Employment Situation Report for the month of June, which showed the addition of 222,000 nonfarm payrolls (consensus 173,000) and stable hourly earnings (+0.2% vs consensus +0.3%), was the focus of Friday's session. The report was largely seen as another ‘Goldilocks' report, pointing to an economy that is growing at a modest rate without the worry of inflation.

Eight of the S&P 500's eleven sectors ended Friday in the green, which was just enough to bring the benchmark index back into positive territory for the week. The technology group was the top-performing sector, benefiting from broad strength. However, the energy group underperformed as crude oil weighed.

WTI crude futures struggled this week, dropping 4.1%, following news that OPEC exports increased in the month of June and headlines that Russia is not in favor of deepening the current OPEC-led production cut agreement. In addition, the weekly inventory report from the Department of Energy, which showed a rise in U.S. production alongside a larger than expected drop in crude and gasoline stockpiles, also prompted selling pressure.

The fed funds futures market still points to the December FOMC meeting as the most likely time for the next rate-hike announcement with an implied probability of 59.1%, up from last week's 54.4%.