The Dowling Group Week In Review: 6/23/17 Skip to Content

After some teeter tottering at the start of the week, the S&P 500 settle into a sideways trend, drifting alongside its unchanged mark, as investors lacked conviction to decisively move the market one way or the other. In the end, the benchmark index sealed its second-consecutive weekly win with a slim gain of 0.2%.

Wall Street kicked off the week on a positive note with both the S&P 500 and the Dow advancing to new all-time highs. The Nasdaq exhibited relative strength as technology and biotechnology stocks outperformed, bucking their recent bearish trends, with names like Apple (AAPL) and Biogen (BIIB) leading the charge. Financials also posted a solid performance, continuing their bullish two-week run.

The tide turned on Tuesday as the benchmark index coughed up nearly all of Monday's advance. The energy sector finished at the bottom of the leaderboard, for the second day in a row, as crude oil continued to tumble amid excess supply concerns. However, despite the bearish tone, biotechnology stocks kept chugging along, pushing the iShares Nasdaq Biotechnology ETF (IBB) higher by 1.3%.

Range-bound action set in on Wednesday as the heavily-weighted health care and technology sectors upheld the S&P 500 amid weakness in the broader market. Staying true to the week's trend, biotech companies were bullish, advancing the IBB higher by 4.1%, while crude oil was bearish, dropping another 2.3%, despite a relatively upbeat inventory report from the Department of Energy. 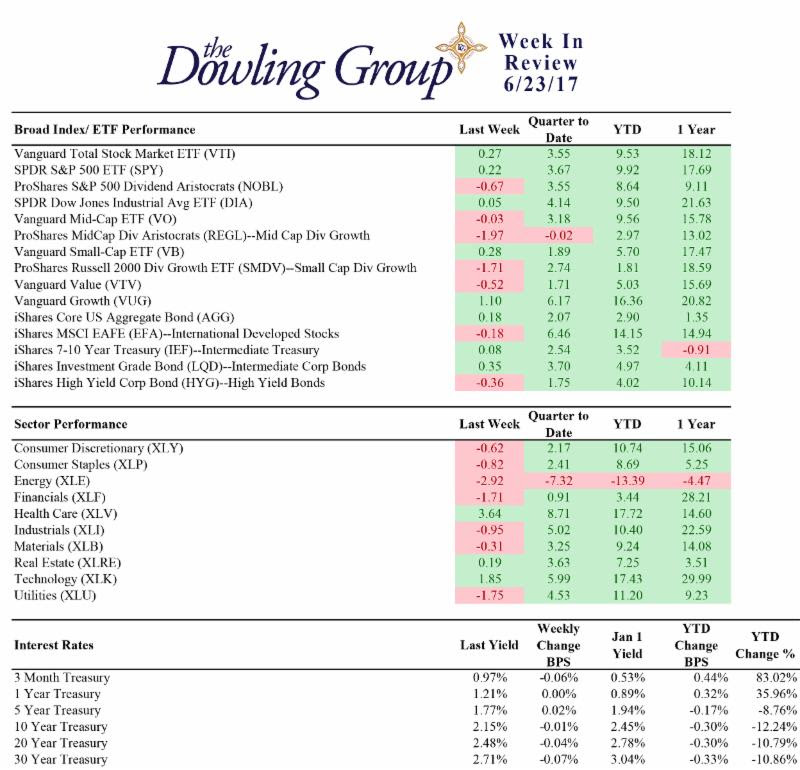 Investors shifted their attention to Washington on Thursday as the Senate rolled out its version of the healthcare reform bill. Compared to the version that the House passed last month, the Senate's version would roll back the Affordable Care Act's Medicaid expansion more gradually, but the cuts to Medicaid would be larger in total. However, in general, the two versions of the bill are very similar.

The health care sector took the news in stride, moving higher by 1.1%, but the S&P 500 settled slightly lower as the financials, consumer staples, and utilities sectors weighed. Crude oil did manage to secure its first win of the week, but the advance was modest in comparison to the commodity's recent swoon. Moving into Friday's session, the energy component held a week-to-date loss of 4.5%.

Equities ended the week on a positive note as the technology and energy sectors fended off the negatively-charged financials, consumer discretionary, and health care groups. Biotech stocks fell to some profit-taking efforts early, but the IBB still managed to pull out a win, ending the week higher by 9.6%. Crude oil registered another modest win on Friday, but ended the week lower by 4.0%.

The fed funds futures market now points to the December FOMC meeting as the most likely time for the next rate-hike announcement with an implied probability of 51.3%, up from last week's 43.4%.