The Dowling Group Week In Review: 6/9/17 Skip to Content

The stock market successfully hurdled several key macro events, including the testimony of former FBI Director James Comey, the latest policy decision from the European Central Bank, and the UK general election, only to get tripped up by tech stocks on Friday. The major averages settled the week mixed with the Dow adding 0.3% while the S&P 500 and the Nasdaq lost 0.3% and 1.6%, respectively.

Following back-to-back losses for the S&P 500 on Monday (-0.1%) and Tuesday (-0.3%), financials led the benchmark index to its first win of the week in the midweek session (+0.2%), even in the face of a bearish inventory report from the Energy Information Administration. Crude oil plunged nearly 5.0% after the EIA showed a build in both crude and gasoline inventories for the week ended June 2.

However, prepared remarks from Mr. James Comey, which were released to the public ahead of Thursday's testimony, were the focal point of Wednesday's session. The initial response to the statement was positive as market participants were seemingly heartened by the understanding that there wasn't any overt obstruction of justice claim against President Trump.

On Thursday, the Senate Intelligence Committee directly asked Mr. Comey if he thought Mr. Trump was trying to obstruct justice during their meeting on February 14 when he told Mr. Comey that he hoped the FBI could let go of the investigation of former National Security Adviser Michael Flynn. Mr. Comey responded that it wasn't for him to say and he would let others make that determination. 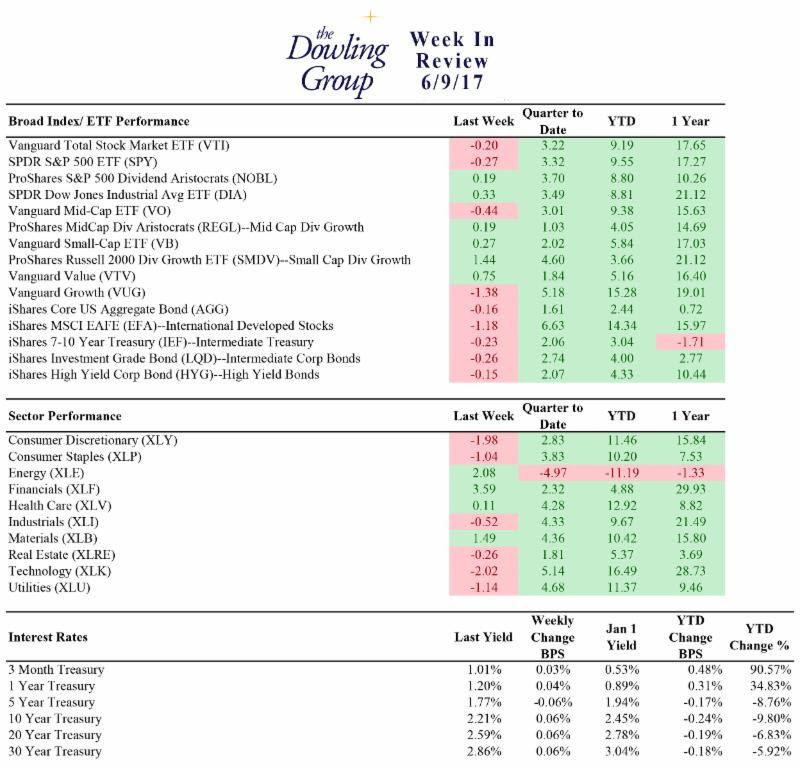 Investors breathed a sigh of relief, not only in reaction to Mr. Comey's testimony, but also in reaction to the ECB's decision to leave interest rates unchanged, as expected. With two of the week's three major events in the rearview mirror, the financial sector led the S&P 500 to its second victory of the week. However, gains were held in check as investors awaited the results of the UK general election.

The top-weighted technology sector, which houses five of the six aforementioned companies, plunged 2.7% on Friday. However, the financials and energy sectors, which have been underperforming all year, helped keep the tech group's bearish influence in check, adding big gains of 1.9% and 2.5%, respectively, in what had the appearance of a sector rotation trade.

The fed funds futures market still points to the June FOMC meeting as the most likely time for the next rate-hike announcement with an implied probability of 95.8%, unchanged from last week. The U.S. central bank will kick off its two-day meeting on Tuesday with the rate-hike decision crossing the wires on Wednesday afternoon at 14:00 ET.