The Dowling Group Week In Review: 5/26/17 Skip to Content

The stock market registered five wins this week, three of which resulted in a new record high for the S&P 500. A continuation of last week's ‘buy-the-dip’ trade fueled the bulls at the beginning of the week, but the FOMC minutes from the May 2-3 meeting became the catalyst for the midweek move to new record highs. For the week, the S&P 500 added 1.4%.

Before moving into record-high territory, investors had to repair the damage done by last week's 800-pound gorilla; namely, a New York Times article that highlighted a potential obstruction of justice move by President Trump. The allegation prompted the stock market's worst one-day decline since September on May 17, therefore, investors' first priority was reclaiming what was lost.

Two modest wins on Monday (+0.5%) and Tuesday (+0.2%) put the S&P 500 right at the 2,400 mark, which is the level it hit right before the swoon on May 17. Led by the financial sector, the benchmark index challenged said level a few times on Tuesday, but it just needed a little something extra to get over the hump. The FOMC minutes from the May 2-3 meeting answered the call on Wednesday. 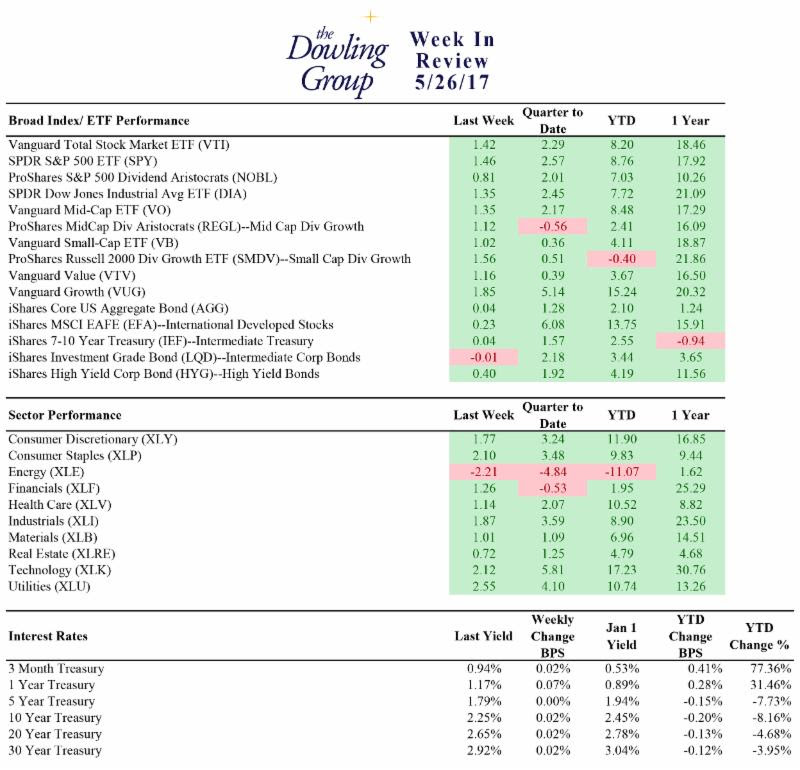 In the minutes, the Fed revealed a possible approach to unwind its massive balance sheet; the central bank would like to introduce a gradual increase of caps to limit the reinvestment of maturing securities. In addition, the Fed's willingness to discuss the issue showed that the central bank has pretty good confidence in the economic outlook, having attributed first quarter weakness to transitory factors.

Following the report, the S&P 500 advanced to new record highs on Wednesday and Thursday. However, investors in the crude oil futures market weren't so bullish. The energy component tumbled nearly 5.0% on Thursday after OPEC and non-OPEC nations agreed to extend their current production adjustment by nine months, but stopped short of increasing the magnitude of the supply cut.

Equities finished the week with a sleepy, range-bound performance on Friday as investors got a jump start on the extended holiday weekend. For the week, the top-weighted technology sector outperformed yet again, adding 2.3%, with Apple (AAPL), Alphabet (GOOG), Microsoft (MSFT), Amazon (AMZN), and Facebook (FB) increasing their aggregate market value to an astounding $2.93 trillion.

The fed funds futures market still points to the June FOMC meeting as the most likely time for the next rate-hike announcement with an implied probability of 83.1%, up from last week's 78.5%.