The Dowling Group Week In Review: 5/19/17 Skip to Content

After opening the week with a record-high close, equities took a hit in the midweek session after an article in the New York Times highlighted a potential obstruction of justice move by President Trump. However, the bulk of Wednesday's loss was retraced in the second half of the week as a ‘buy the dip’ mentality set in. The S&P 500 ended the week lower by 0.4%.

Crude oil was a focal point on Monday, jumping 2.1% to $48.86/bbl, on news that the world's top two oil producers—Saudi Arabia and Russia—are in favor of extending the original OPEC/non-OPEC supply cut agreement, which is currently scheduled to end in June, by another nine months. The commodity's positive performance helped the benchmark index climb 0.5% to a fresh all-time high.

The major averages ended the second session of the week little changed, but a solid performance from mega-cap names like Microsoft (MSFT) and Amazon (AMZN) pushed the Nasdaq to another record high. Led by NVIDIA (NVDA), chipmakers also underpinned the tech-heavy Nasdaq with the PHLX Semiconductor Index adding 1.5% for the second day in a row.

On Wednesday, equities suffered their worst one-day decline since September following a New York Times article that claimed President Trump asked former FBI Director James Comey to shut down the Bureau's investigation of former National Security adviser Michael Flynn. If true, some legal experts believe the alleged incident would qualify as obstruction of justice, which is an impeachable offense. 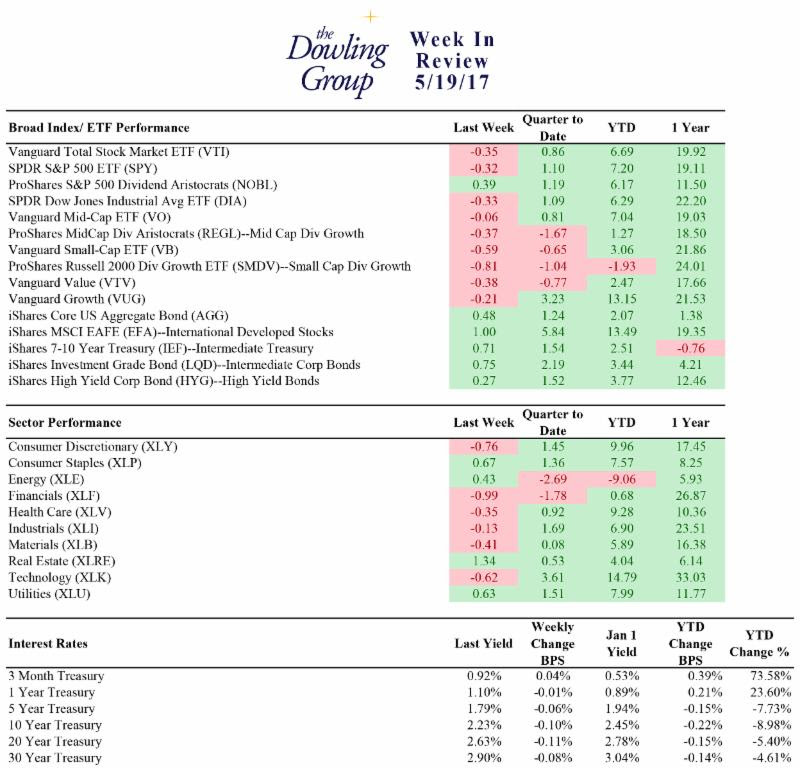 The allegation forced Wall Street to come to a quick realization that President Trump's pro-growth agenda items (i.e. tax reform, deregulation, and infrastructure spending) might not come to fruition as quickly as envisioned or perhaps not at all. The S&P 500 settled Wednesday's session with a loss of 1.8%. However, the bearish sentiment didn't last long as investors ‘bought the dip’ on Thursday.

Underpinned by the semiconductor and biotechnology industries, the S&P 500 advanced 0.4% on Thursday in the face of a Reuters report that the Trump campaign might have had at least 18 undisclosed contacts with Russian officials and others with Kremlin ties leading up to, and after, the U.S. presidential election. The potentially concerning report helped keep the S&P 500 below its 50-day simple moving average, but the key technical level was no match for the bulls on Friday.

The major U.S. indices ended the week on a positive note with the S&P 500 adding 0.7%. The Friday session had a risk-on feel to it with cyclical sectors showing relative strength, Treasuries ticking down, and the CBOE Volatility Index (VIX) dropping over two points. Crude oil came back into focus once again, jumping 2.0% to $50.33/bbl, following reports that top oil producers will consider increasing the size of the OPEC/non-OPEC production cut when they meet on May 25.

The fed funds futures market still points to the June FOMC meeting as the most likely time for the next rate-hike announcement with an implied probability of 78.5%, unchanged from last week's 78.5%.