The Dowling Group Week In Review: 5/12/17 Skip to Content

After posting gains for four weeks in a row, the S&P 500 suffered a slight setback this week, ticking lower by 0.4%. However, the Nasdaq enjoyed a small victory, adding 0.3%, as it continued to ride the relative strength of Apple (AAPL), Amazon.com (AMZN), and a gaggle of semiconductor issues led by NVIDIA (NVDA).

The S&P 500 was flat through the first three sessions of the week with a slim loss on Tuesday wiping out small victories on Monday and Wednesday. The range-bound performances followed Sunday's French presidential election in which centrist candidate Emmanuel Macron handily defeated far-right candidate Marine Le Pen, as expected. Mr. Macron's victory was seen as a positive for global equity markets as it takes the possibility of France leaving the European Union off the table for the foreseeable future.

With a key risk event averted, the CBOE Volatility Index (VIX) retreated to a historically-low level. The VIX, also known as the "investor fear gauge", settled Monday at its lowest mark since December 1993 and finished Tuesday and Wednesday below 10.00. Prior to this week, the VIX had only settled below the 10.00 mark nine times.

Crude oil became a focal point on Wednesday after the Energy Information Administration reported the largest weekly decline in U.S. crude stocks so far this year. The bullish reading prompted a two-day rally for the commodity, and the energy sector, which ultimately left WTI crude with a weekly gain of 3.5%. 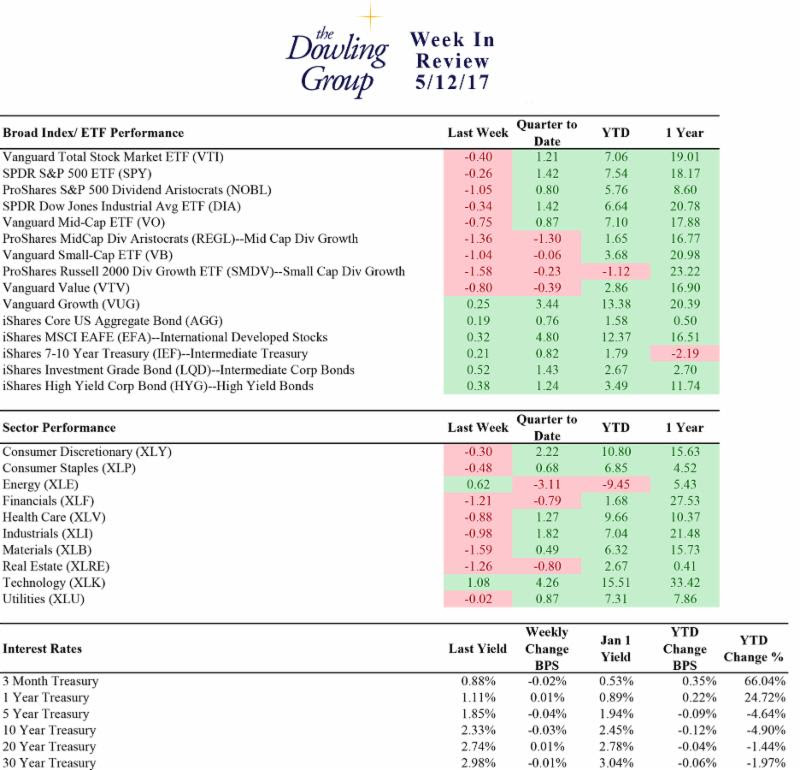 Also of note, President Trump unexpectedly fired FBI Director James Comey on Wednesday. That move triggered a tidal wave of political opinions and raised some concerns about the path of progress for the Trump Administration's pro-growth plans that stymied the stock market. Overall, though, it did not cause any major selling in the stock market.

Retailers captured investors' attention on Thursday when Macy's (M) plunged 17.0% in reaction to its disappointing earnings report. Kohl's (KSS), Nordstrom (JWN), and J.C. Penney (JCP) also slipped after delivering their quarterly results, leaving the SPDR S&P Retail ETF (XRT) lower by 2.9% for the week. Disappointing Retail Sales for April (+0.4% actual vs +0.6% consensus) didn't help matters, but some of the sting of that headline was taken out by an upward revision for March to 0.1% from -0.3%.

April CPI came in roughly as expected on Friday with total CPI rising 0.2% (consensus 0.2%) and core CPI, which excludes food and energy, adding 0.1% (consensus 0.2%). On a year-over-year basis, total CPI is up 2.2% and core CPI has increased 1.9%. Following the data, Chicago Fed President Evans said that he expects one or two additional rate hikes this year with the actual number depending on the level of inflation.

The fed funds futures market still points to the June FOMC meeting as the most likely time for the next rate-hike announcement with an implied probability of 78.5%, down from last week's 83.1%. In the Treasury market, increased buying interest in the second half of the of week left the benchmark 10-yr yield at 2.33%, which is two basis points below last Friday's closing level.

The S&P 500 posted modest losses on Thursday and Friday, which is what ultimately tipped the week in the bears' favor.