The Dowling Group Week In Review: 5/5/17 Skip to Content

The S&P 500 opened the week by eking out back-to-back wins. Monday's marginal victory was fueled by the top-weighted technology and financials sectors while Tuesday's uptick took place despite the lack of sector leadership and crude oil's 2.5% decline. On the political front, Congress reached an agreement to keep the government funded through September while President Trump reiterated that he might like to break up the nation's biggest banks.

On Wednesday, the benchmark index registered its first, and only, loss of the week (-0.1%) after Apple (AAPL) reported lower than expected iPhone unit sales. However, the tech giant's upbeat earnings kept losses in check. The FOMC voted to leave the fed funds target range unchanged at 0.75%-1.00%, as expected, with the accompanying policy statement providing little to no new information. 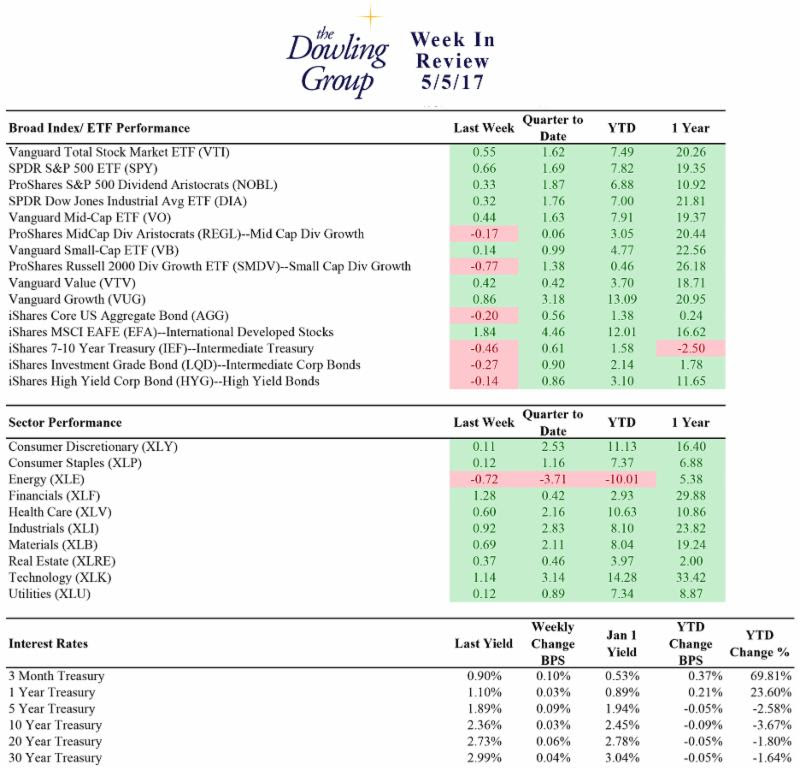 The House of Representatives passed the revised American Health Care Act on Thursday, a big victory for the GOP. However, the bill will face heavy resistance in the Senate, where it can only afford to lose two Republican votes. Crude oil also made headlines, plunging 4.7% to a five-month low near $45.50/bbl. The tumble was credited to a string of disappointing inventory reports, some weak data out of China, and the deteriorating technical picture for the commodity. The S&P 500 added 0.1%.

Buyers were intrigued by Friday's better than expected Employment Situation Report for April, however, gains were capped once again ahead of the final round of the French presidential election, which will take place on Sunday. Polls suggest that Emmanuel Macron will easily defeat his rival Marine Le Pen, which has been construed as a positive for global equity markets given Ms. Le Pen's anti-EU rhetoric. France's CAC ended the week at its highest level in over ten years.

In the end, despite the range-bound action, this week will be remembered as a happy one with the S&P 500 advancing for the fourth week in a row, adding 0.6%. The fed funds futures market still points to the June FOMC meeting as the most likely time for the next rate-hike announcement with an implied probability of 83.1%, up from last week's 66.6%.