The Dowling Group Week In Review: 4/21/17 Skip to Content

After closing last week with three consecutive losses, the stock market returned to its winning ways on Monday. The financial sector had a hand in the bullish bias, shooting 1.6% higher, after shrugging off solid earnings reports from JPMorgan Chase (JPM) and Citigroup (C) the session before.

However, financials left investors scratching their heads, yet again, on Tuesday and Wednesday after a pair of upbeat earnings reports from Bank of America (BAC) and Morgan Stanley (MS) sent the financial sector back towards its flat line for the week. To be fair, Goldman Sachs (GS) did disappoint with misses on top and bottom lines, however, the lone report did little to change the overall tone of the earnings season, which has been mostly positive for financials.

The focus on the financial group stems from its leadership in the stock market's post-election rally, a period in which the sector grew by 26.0%. Since then, the showing from the financial space has been closely mimicked by the broader market, which has used the sector's performance to navigate the recent waters of uncertainty. 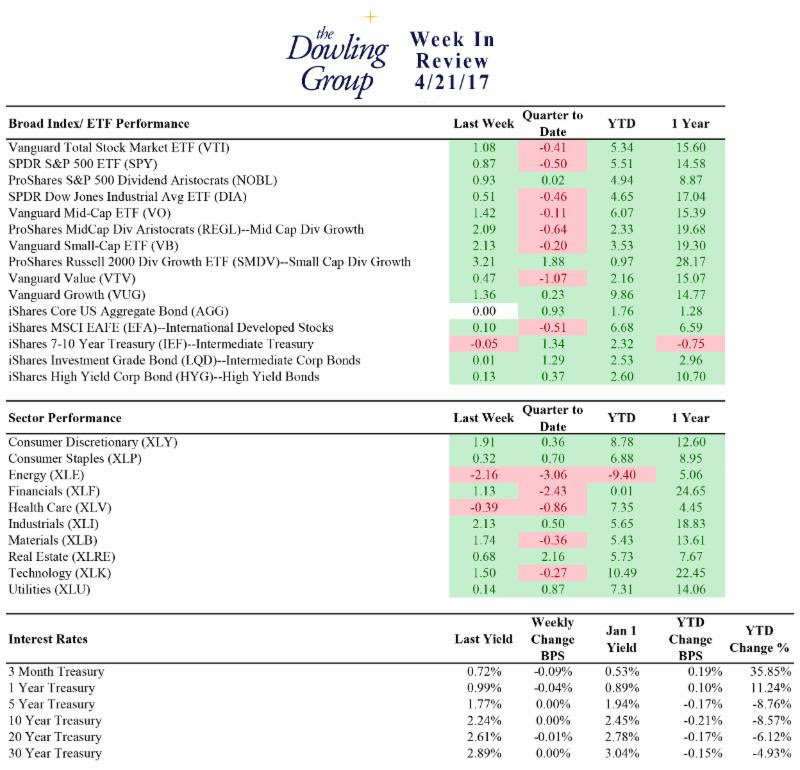 That's not to say the financial sector deserves all the blame for the equity market's mid-week slump. Crude oil was a guilty party on Wednesday, dropping 3.6%, after the EIA reported a smaller than expected draw in U.S. crude inventories. In addition, angst on the geopolitical front, especially in regards to the French presidential election, lingered throughout the week.

On Thursday, investors shifted their attention to Washington amid reports that the Freedom Caucus, the group credited with blocking the GOP's first attempt at health care reform, is now on the same page with the moderate wing of the House GOP. Progress on health care reform has been elusive, but it would be a positive for investors as it should clear the way for more comprehensive tax reform. As a result, the S&P 500 broke its two-session losing streak to close higher by 0.8%.

The first round of the French presidential election, which will narrow the race to two candidates, kept the bulls at bay on Friday. Far-right candidate Marine Le Pen and far-left candidate Jean-Luc Melenchon, both of which have expressed interest in France leaving the European Union, are two of the top four hopefuls vying for the final round, giving some investors angst regarding the future of the single market. French citizens will take to the polls on Sunday.

After all was said and done, the S&P 500 closed the week higher by 0.9%. However, the up-and-down action led to a dip in rate hike expectations; the fed funds futures market points to a 48.5% implied probability of a June rate hike, down from last week's 57.3%. Market participants now point to July as the most likely time for the Fed to announce the next rate hike with an implied probability of 53.6%.