The Dowling Group Week In Review: 4/14/17 Skip to Content

Last week's headlines kept on giving as investors displayed caution in light of the ongoing situations in Syria and North Korea. The S&P 500 ended the week with a loss of 1.1%, but, more notably, the benchmark index finished the week below its 50-day moving average (2352).

North Korea took center stage at the beginning of the week after the U.S. Navy ordered the Carl Vinson Strike group towards the Korean Peninsula. This prompted rumors of Chinese troop movement along the North Korean border, but these claims were later refuted by China's Defense Ministry.

President Trump added some fuel to the fire on Tuesday morning, tweeting that he would like China's help in diffusing the North Korean situation, but the U.S. is willing to solve the problem on its own. However, through all the noise, the S&P 500 was flat through the first two days of the week as its 50-day moving average provided a measure of support.

North Korea will celebrate the birth anniversary of founder Kim Il-sung on April 15 and there is speculation that another nuclear test could be conducted that day. 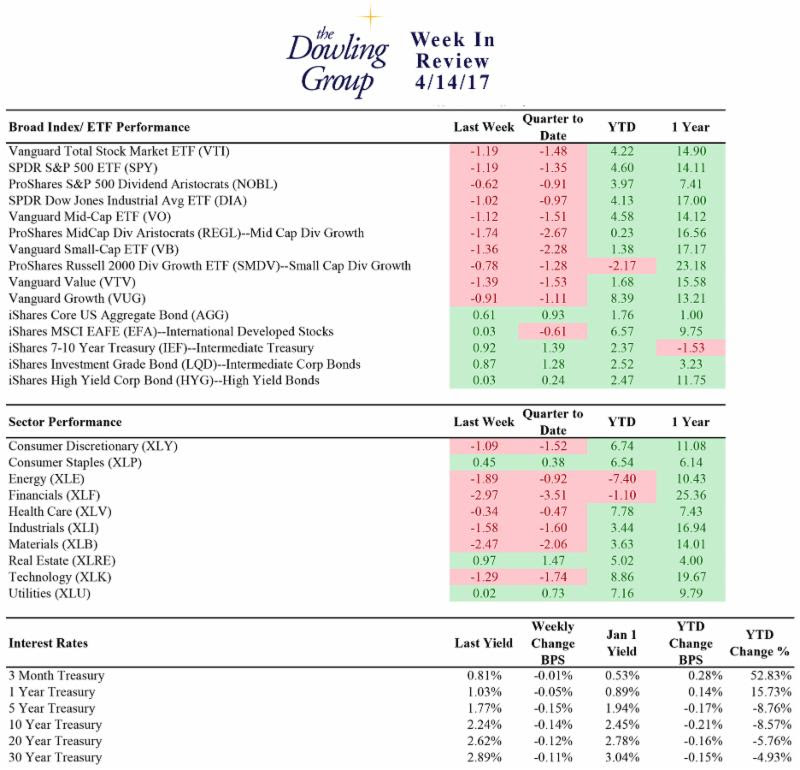 The conflict in Syria took precedence on Wednesday as U.S. Secretary of State Rex Tillerson made a stop in Moscow. Mr. Tillerson met with Russian President Vladimir Putin, despite earlier reports that the U.S. diplomat would not have access to the Russian president, but conversations were reportedly heated. Nonetheless, the two countries agreed to establish a working group to iron out their issues.

Investors shifted their focus back to the home front on Thursday with JPMorgan Chase (JPM), Citigroup (C), and Wells Fargo (WFC) kicking off the earnings season. All three companies reported better than expected earnings, but were mixed when it came to revenues; JPM and C beat top line estimates while WFC fell short. However, the banks were unable to capitalize on the upbeat reports, which acted as a discouraging signal to the broader market.

If one thing can be said for sure after reflecting on this week's activity, it's that investors are becoming more skeptical about the future, evidenced by the CBOE Volatility Index (VIX 15.67, -0.10), which increased three points for the week. The VIX index now sits at its highest level since the presidential election.

The lingering geopolitical issues led to a notable dip in rate hike expectations. The fed funds futures market ended the week pointing to a 57.3% implied probability of a June hike, down from last week's 70.6%.