The Dowling Group Week In Review: 4/7/17 Skip to Content

The stock market saw limited movement during the past week, leaving the S&P 500 just below its closing level from last Friday. The benchmark index bounced around a 34-point range before locking in a modest weekly loss (-0.3%) while the Dow Jones Industrial Average, which was flat for the week, outperformed.

Geopolitical developments were in focus from the jump. On Monday, President Donald Trump was quoted as saying he is ready to act alone on North Korea if China does not change the current situation on the Korean peninsula. The comments were made just days before Chinese President Xi Jinping's visit to President Trump's resort in Florida and ahead of a joint military exercise held by South Korea, the United States, and Japan. North Korea was back in the headlines on Wednesday when it conducted another missile test.

The geopolitical conversation did not end there. On Friday morning, participants learned that the U.S. Navy conducted an overnight strike against the Shayrat airbase in Syria, which was deemed responsible for a chemical attack that was reportedly conducted on Tuesday. The action was supported by several U.S. partners while Russia suspended its information sharing agreement with the U.S. that was put into effect when Russia launched an air campaign in Syria in 2015. 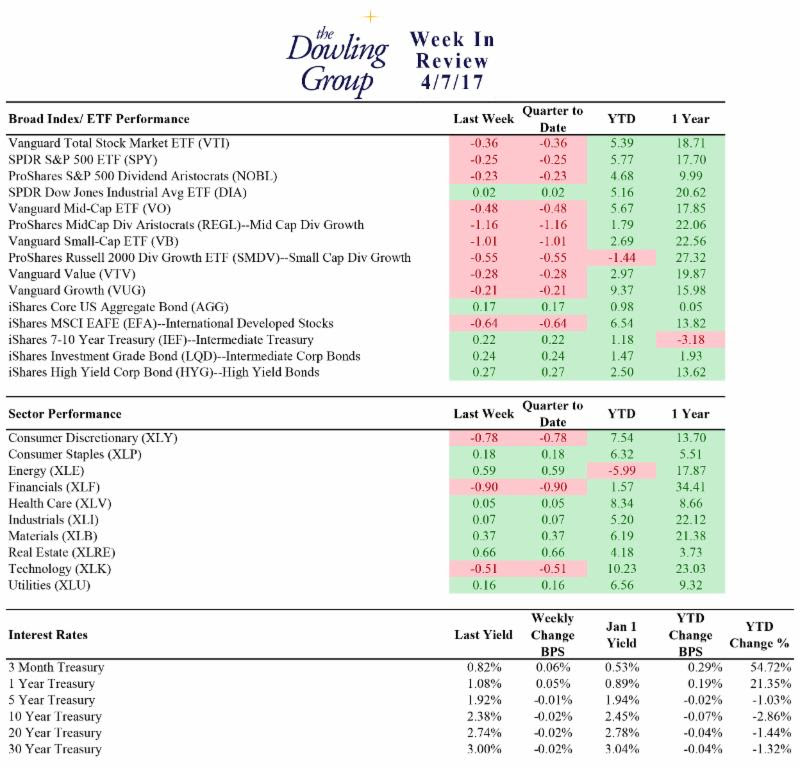 In addition to the geopolitical developments, participants received the latest Employment Situation report, which was a disappointment. Only 98,000 nonfarm payrolls were added in March, which was a far cry from the consensus estimate of 180,000. Average hourly earnings increased 0.2% and February earnings growth was revised up to 0.3% from 0.2%.

The report spoke to the ongoing disconnect between the hard data and the soft data and it should challenge the stock market's economic growth assumptions. The growth assumptions may also be put to a test by policy actions from the Federal Reserve, considering the FOMC Minutes that were released on Wednesday revealed a discussion about a reduction to the Fed's balance sheet in the near term.

As for rate hike expectations, the fed funds futures market does not expect a rate hike to be announced in May (4.3%), but expectations for a June hike have firmed a little, with the corresponding probability rising to 70.6% from last week's 62.5%.