The Dowling Group Week In Review: 3/24/17 Skip to Content

Investors who have gotten accustomed to a steady string of gains in the stock market were taken aback by this week's action, which sent the S&P 500 lower by 1.4%. This marked the fourth weekly decline of 2017 and was the largest weekly drop since early November.

The week got off to an unassuming start as Monday's action was confined to a narrow range. There was no noteworthy earnings or economic news to digest, and the impending House vote on the plan to repeal and replace the Affordable Care Act led to caution among participants.

That caution turned into outright selling on Tuesday, sending the S&P 500 lower by 1.2%. A number of factors were cited for the decline, but the day's selling was most aggressive in the financial sector as the SPDR S&P Bank ETF (KBE) fell 4.8%. The industry group stumbled as the yield curve continued flattening in a manner that contradicts the pro-growth narrative that accompanied the stock market on its charge to a fresh record. 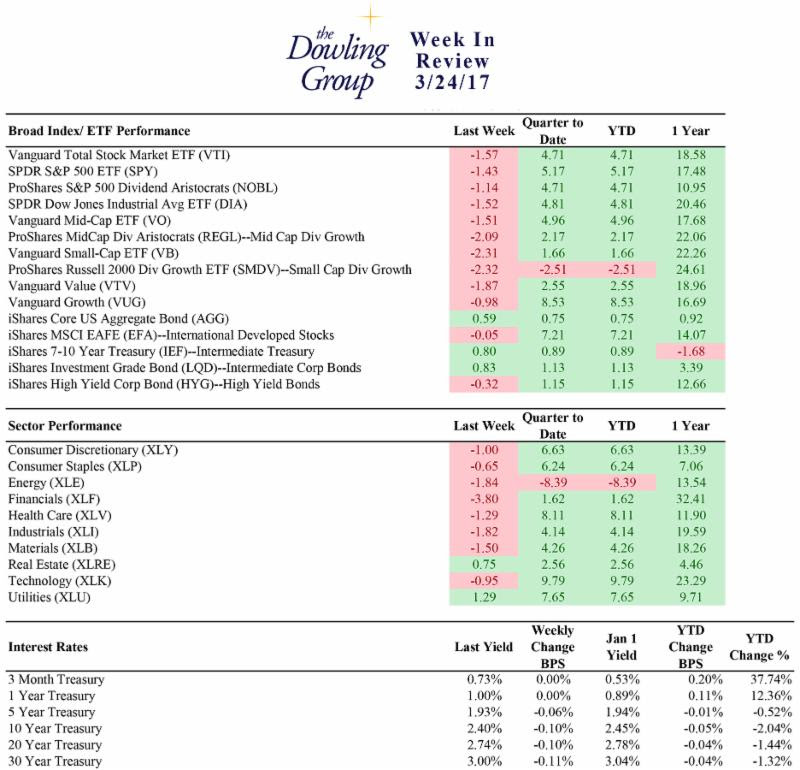 Furthermore, the prospect of health care reform making its way through the legislative process dimmed as the week went on. The House of Representatives was scheduled to take part in a Thursday vote, but that vote got put on hold and cancelled on Friday afternoon due to a lack of support. Investors are acutely aware that a delay in passing health care reform means that tax reform will also need to wait.

Although the week was quiet on the economic front, it is worth noting that February Existing Home Sales missed estimates while February New Home Sales and February Durable Orders were better than expected. The Durable Orders report caused the Atlanta Fed to nudge its GDPNowcast for the first quarter up to 1.0% from 0.9%. To be fair, excluding transportation, Durable Orders came up shy of estimates, indicating relatively weak business spending.

Taking a look at rate hike expectations, the fed funds futures market spent the week pointing to a 50.0%+ likelihood of a June hike, but that implied probability dropped to 49.6% on Friday afternoon after the news of the health care vote being pulled made the rounds. One week ago, the fed funds futures market showed a 58.3% implied probability of a hike in June.